The aim of the first week is to discover different and militant knowledge through classes, workshops and collective discussions. The key point is to give information to the participants.

At this link you can find the reading list for the classes/workshops: https://we.riseup.net/ecoec/ecoec-reading-list 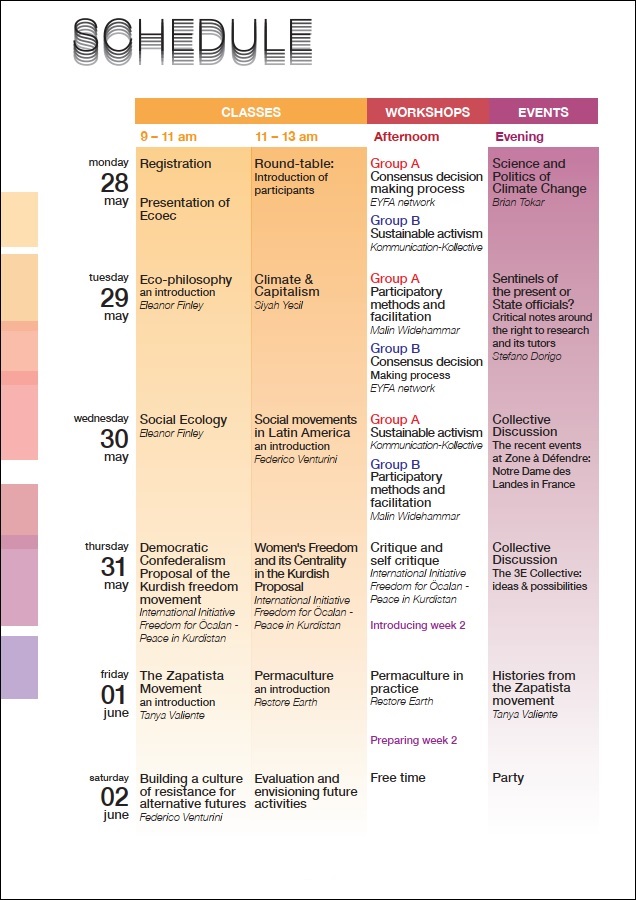 Science and Politics of Climate Change: Brian Tokar
What does current science tell us about the immediate and longer-range consequences of disruptions to the global climate? What is the latest evidence linking increasingly extreme weather across the world to long-range climatic changes? How does the perspective of climate justice help us clarify the further evolution of the climate movement and illuminate the inadequacies of current global climate policies? We will address these questions and more, and aim to encourage a searching discussion of where the climate movement might be headed today.

Eco-philosophy: an introduction: Eleanor Finley
We often think of “ecology” and other sciences as objective and politically neutral. However, the history of ecology, which begins in 1864 with the term’s invention by German zoologist Ernst Haeckel, reveals an intimate relationship between how we think about nature and how we think. Dialectical philosophy in particular provides important insights into how we understand nature and humanity’s role within in. In this class, we will discuss liberatory forms of ecological philosophy and consider how their insights might impact how to go about social change.

Social Ecology: Eleanor Finely
“Social ecology” is one of the founding ideas of this ecosocialist convergence. But what does it really mean? Why does it matter? Where does it come from? This course provides an overview and introduction to the concept of social ecology introduced to the world by libertarian socialist Murray Bookchin during the 1970s and ‘80s. Overall, we will focus on the depth, breadth, and scale of social transformations necessary to solve today’s ecological crisis.

Climate & Capitalism: Siyah Yesil
The class will be concerned with one or more of the following topics: (a) Climate Change – conservation issue or social issue? (b) Why is it apparently impossible to stop climate change in a capitalist world economy? What is due to systemic trends, what is the effect of historic accident? What is the past, present and future role of fossil fuels for productivity of work and military dominance, and what is the link between economic growth and environmental destruction? (c) What can a grassroots movement against climate change possibly achieve? Class struggle or environmental struggle?

Democratic Confederalism Proposal of the Kurdish freedom movement: International Initiative Freedom for Öcalan – Peace in Kurdistan
At a time when world powers are slipping more into sexism, nationalism, fascism, religionism why is a movement that has bee struggling for freedom for Kurdish people has moved more and more into non-state governance, women’s freedom, ideas of democratic nation and cultural religion. Can democratic confederalism respond to the crisis we are in?

Women’s Freedom and its Centrality in the Kurdish Proposal: International Initiative Freedom for Öcalan – Peace in Kurdistan
Women’s freedom: not only but especially and it needs to be coupled with killing the man and a struggle for men’s freedom. How does this determine all ideologies and practices? How has this change within the Kurdish movement affected their theory and practice?

Permaculture: an introduction: Restore Earth
In this class we will explore future scenarios for an energy decent programs. Moreover we will try to answer to the question why we need permanent agro ecological method to mimic the nature for ecological restoration why we are creating edible landscaping.

Building a culture of resistance for alternative futures: Federico Venturini
In this final class we will explore which kind of lessons we can draw from all the concepts, practices and examples introduced during the week. What do we need to do in order to envision and build alternative futures to capitalism? Today more than ever, building a culture of resistance is what we are calling for.

Consensus decision – making process: EYFA network
Consensus is a creative and dynamic way of reaching agreement between all members of a group. It can be a powerful way to overcome hierarchies and collectively organise for radical social change. This participatory workshop will explore key values and attitudes and practice basic skills that make consensus work. Whether you are new to consensus or you have been using it for a while, this workshop can help you make decisions more effectively in your groups and networks.

Sustainable activism: staying politically active without burning out: Kommunication-Kollective
We often meet groups who develops the same patterns: phases of stress which have a big political impact – with many actions, meetings, activities – followed by phases in which people leave groups and projects, have no power left or their priorities shift. Also in our political work we are often confronted by emotional incriminating situations: deportations, evictions, police violence – and at the same time arguments and conflicts within our groups. This workshop gives you the possibility to reflect your own patterns and gives you some basic knowledge on emotional first aid and ways to deal with stress, burn-out and traumatic experiences. In the short time we can not cover every topic, so see it as a impulse to start reflecting on this topic.

Participatory methods and facilitation: Malin Widehammar
During this workshop we will explore how we can use participatory methods in meetings to allow all to have an equal opportunity to have a say and be involved. Instead of a few people taking most of the space on meetings and end up to have more influence than others. We go through tools and methods which is easy and effective to use for discussions, planning and decisions. We will learn about the role as a facilitator and practice. Together we share our experiences to learn from each other and work with examples from where we are active.

Permaculture in practice: Restore Earth
In this practical workshop we will explore the surrounding environment and the demonstrations sites looking for permaculture principles and practices. 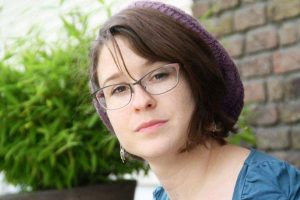 Eleanor Finley
Eleanor Finley is a writer, speaker, activist, and organizer. She is a Board Member at the Institute for Social Ecology (ISE) and participates in various popular education and organizing projects about libertarian municipalism. She is a Ph.D. Student in anthropology at the University of Massachusetts, Amherst.
https://umass.academia.edu/EleanorFinley

Kommunication-Kollective
The Kommunication-Kollective is made up of a handful of young and experienced trainers. They have all been active in grassroots groups and social movements for years. This has sparked our interest in group process and group dynamics, so that they worked on topics such as how to overcome hidden hierarchies and how to deal with obstacles in communication and consensus decision making.
http://www.kommunikationskollektiv.org

Siyah Yesil
She is a member of the German grassroots movement for Climate Justice, who has been active against coal mining and lately also mass animal farming. 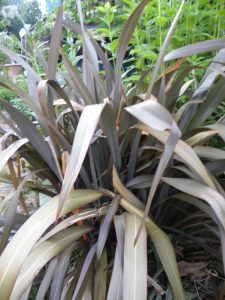 Restore Earth
Restore Earth is an edible landscape designer and teacher with a social justice focus. 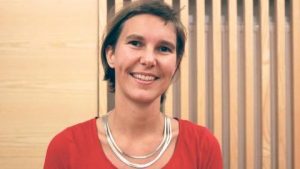 Malin Widehammar
Long time grassroots organiser, working with mainly issues for democratisation for participatory democracy and as well housing, cooperative housing, local organising, climate change, youth participation and popular education. She was part of starting up the organisation “The City We Want” and organised a Citizen summit. She is active in the organisation Democratic Transition and one of the organizers of the conference “Democratization and Movement” in Gothenburg. She is a member of Transnational Institute of Social Ecology, and several other networks. 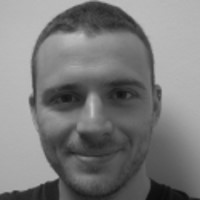 Federico Venturini
Federico Venturini is activist-researcher currently based in Udine, Italy. He has worked with several grassroots organisations in Italy, UK, Turkey and Brazil. He is currently board member of the Transnational Institute of Social Ecology , member of the Imrali Peace delegation and of Korov’ev collective. He obtained his phd at the University of Leeds, with a research conducted with participatory and militant methodologies and focussing on social movements, social ecology and urban dynamics in Brazil. 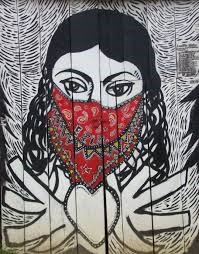 Tanya Valiente
Tanya Valiente is a trained sociologist and she worked has human rights observer in Chiapas, Mexico for one year. She started her own educational project „Balumil“ in cooperation with the autonomous educational system of the Zapatistas. Moreover, she is member of Ya-Basta-Net Germany and she continuously works in political education focussed on globalization, global social (in)justice and indigenous resistance. 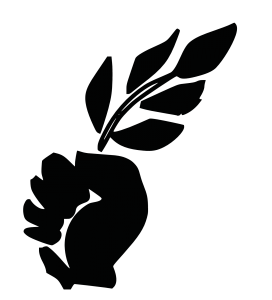 International Initiative Freedom for Öcalan – Peace in Kurdistan
The International Initiative regards itself as a multi-national peace initiative working for a peaceful and democratic solution of the “Kurdish Question” with Kurds and Turks peacefully living together. Even after his imprisonment Abdullah Öcalan is still regarded as the undisputed leader by a majority of the kurdisch comunity.
http://www.freeocalan.org

EYFA network
EYFA is a grassroots network of individuals, collectives and organisations from all around Europe working to transform communities in their approach to environmental, social, political and economic positions. EYFA strives for a world in which people feel empowered to act and raise their voices on the issues that affect their lives. One way to do so is by sharing skills and knowledge that help people work together more effectively.
www.eyfa.org 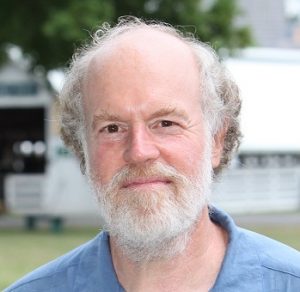 Brian Tokar
He is an activist and author, a Lecturer in Environmental Studies at the University of Vermont, and a board member of 350Vermont and the Institute for Social Ecology. He is the author of The Green Alternative, Earth for Sale, and Toward Climate Justice: Perspectives on the Climate Crisis and Social Change. He is an editor of the 2010 book, Agriculture and Food in Crisis (with Fred Magdoff), and also edited two collections on biotechnology and GMOs: Redesigning Life?and Gene Traders. He has lectured across the US and internationally on social ecology and the links between environmental and social movements.